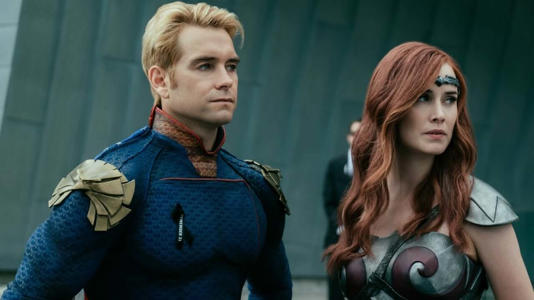 Homelander’s mirror scene in The Boys season 3, episode 6, “Herogasm” perfectly pays tribute to Marvel’s iconic Green Goblin villain. The Boys is well known for its unashamed satire of the popular superhero genre, with the Amazon Prime series largely likening its Supes to notable comic villains and real-world antagonists. Homelander (Anthony Starr) is the greatest example of The Boys’ superhero parody, as he serves as the face of the beloved Seven, but is actually the most dangerous and twisted character in the series thus far.

While “Herogasm” was feared to be a grotesque hour of television for its graphic sexual events, The Boys’ episode exceeded expectations through its fight with Homelander, Soldier Boy, Butcher, and Hughie. As The Boys traveled to Herogasm to find the twins, Homelander prepared to fight Soldier Boy and secure his title as the most powerful Supe, with the series’ main villain also contending with his conflicting desire to be loved by the public. Before his epic battle with Soldier Boy, Homelander speaks to himself in the mirror wherein his “bad” reflection convinces his “good” side to move forward with his dark dictatorial need for power and control.